HONG KONG, May 28, 2018 /PRNewswire/ — A former police headquarters compound in Hong Kong has been transformed into a world-class heritage and arts hub in what is the largest heritage revitalisation project ever undertaken in the city. 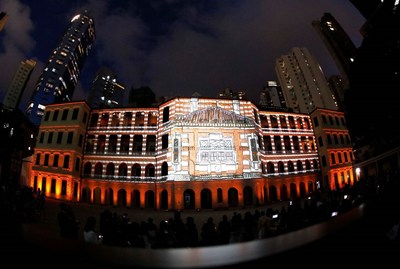 Tai Kwun — Centre for Heritage and Arts opened last Friday (May 26) with a spectacular ceremony.

Comprising 16 historic buildings and outdoor spaces on a 13,600-square-metre site in the business heart of Hong Kong, Tai Kwun is home to three declared monuments, the former Central Police Station, Central Magistracy and Victoria Prison. The local colloquial name used by police officers and the public alike to refer to the city’s Central Police Station, have borne witness to over 170 years of Hong Kong history.

The project is led by the Hong Kong Jockey Club in partnership with the Hong Kong Government and the revitalisation involved the conservation of the heritage buildings and the addition of two new buildings, JC Contemporary, a gallery building with a contemporary art space, and JC Cube, an auditorium building for performing arts, film screenings and educational events.

Drawing on the advice of experts from Hong Kong and overseas, and with input from the community, the Club spent 10 years to pursue a heritage-led plan to conserve the historic site. Building-by-building, room-by-room, it has been returned to its former glory with the closest attention to detail. “Tai Kwun reflects the club at its very best — committed to the highest standards, undeterred by the complexity of the tasks it undertakes, and above all motivated by the desire to act, as in everything it does, for the betterment of our society,” said Dr Simon Ip, Chairman of the Hong Kong Jockey Club.

Hong Kong Chief Executive Carrie Lam, who championed the project a decade ago, said: ” The Central Police Station compound after more than a decade of dedication, patience and perseverance on the part of the Club and the many experts and workers involved, the people can now rejoice at the grandeur of the gift they received.”