NEW YORK, April 26, 2018 /PRNewswire/ — /NYR.com// — His architecture is often described as timeless. That seems to apply to I.M. Pei himself, who celebrates his 101st birthday today. 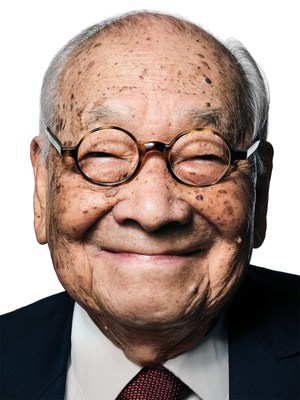 Born in Guangzhou, China, I.M. Pei came to the United States in 1935 to study architecture. He earned a bachelor’s degree from the Massachusetts Institute of Technology, then went on to study at Harvard under Bauhaus masters Walter Gropius and Marcel Breuer. I.M. Pei earned his master’s degree in 1946, and, after working for American real estate magnate William Zeckendorf for several years, he started his own architectural firm in 1955.

Many of his buildings became icons of our time, known all over the world: The Bank of China building in Hong Kong. The Pyramid at the Louvre in Paris. The Four Seasons Hotel and the Centurion Condominium in New York. The Museum of Islamic Art in Doha. The Suzhou Museum in Suzhou, China. The Rock and Roll Hall of Fame in Cleveland, Ohio. Even in his 90s, I.M. Pei maintained an active work schedule, together with his sons at Pei Partnership Architects.

For those who would like to live in a building designed by I.M. Pei, or would like to enhance their real estate investment portfolio with something rare and unique, New York real estate company NYR.com offers several units for rent or sale at 33 West 56th Street, the only condominium building ever designed by I.M.Pei. Offerings include a duplex penthouse for $12,9 million, but a piece of Pei can be had for less than $3 million, prices not unusual for a prime Manhattan location.

New York City is also the place I.M. Pei chose for his own home: a townhouse in the Sutton Place neighborhood in walking distance to the Centurion. There, he will celebrate his special day together with his family and in his favorite city of which he says “New York is pulsating with life.”